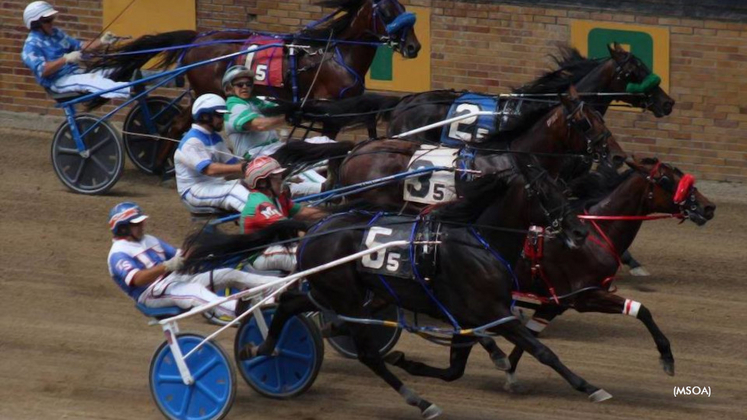 The Pennsylvania fair circuit came to Clearfield for its only four-day stand of the season – two-year-olds on Sunday and Monday, then three-year-olds the last two days, with trotters on the first card of the age group and pacers the second.

When the three-year-old trotters took over Tuesday, an experimental 5:30 p.m. post time was used, with its merits to be studied for future uses. Fastest trotter of the day, and the meet, was the Better Caviar miss Caviar On Broadway, trained and driven by Dave Wade, co-owner with Gerald Brittingham and William Peel III, in a 2:04.2 mile.

The final card brought out the three-year-old pacers and the Always B Miki gelding Buchannon Hanover, whose 1:58.2 mile was by far the fastest mile of the meet, and just a fifth shy of the divisional track record set last year by Terry A Hanover. Trainer/driver Todd Schadel and his wife Christine own Buchannon Hanover, who now has three 2:00 miles on the fair circuit this year, while no other horse has more than one.

Todd Schadel won the Buster DiSalvo trophy, annually given to the horseman driving the most winners; Brady Brown was second in this competition. Schadel also sent out the most winners from his barn, with Roger Hammer, Aaron Johnston and Steve Schoeffel also harnessing multiple winners from their shedrow during a meet where 18 different trainers won at least one race.

The Pennsylvania Fair Circuit now “splits.” There will be racing at the Wayne County Fair in Honesdale (northeast Pennsylvania) this Saturday and Sunday as their “two-day Sire Stakes” event, and then their “regular fair meet” will take place this coming Wednesday and Thursday. The Greene County Fair in Waynesburg (southwest Pennsylvania, and birthplace of Dave Palone) will have two days of racing on Tuesday and Wednesday. Post times vary at Honesdale; Waynesburg’s first race both days is at 12 noon. Entries are drawn on the PA fair circuit two days before the first day of the meet.