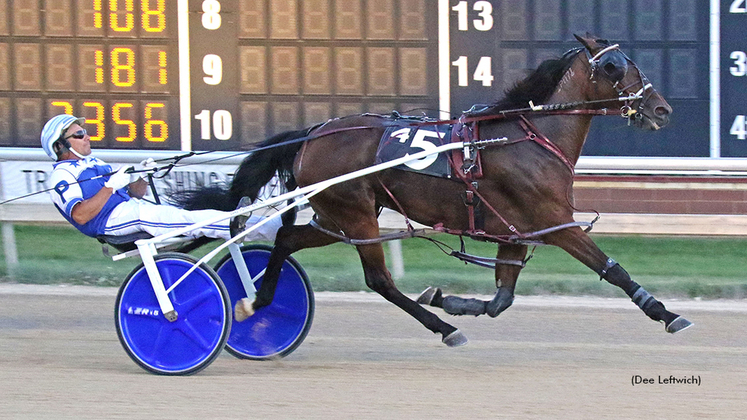 Hottieonthehorizon Strolls To Another Open Win

Hottieonthehorizon picked up her sixth win of the Running Aces season with a dominating stroll-in-the-park style win in the $16,500 Mares Open Handicap Pace on Tuesday night (Aug. 3).

Sent off as the overwhelming 1-20 favourite in the five-horse affair, driver Luke Plano wasted no time in getting the impressive daughter of Vertical Horizon to the front of the field to take control of the contest and post an opening fraction of :27.3 with Avaya Hanover (Mooney Svendsen) securing the pocket and Shesureissomething (Richard Magee) tracking along in third.

From there, Plano slowed the pace down dramatically and stole a second quarter breather of 31 seconds, which left him with plenty of horse for the final half-mile.

There was never an anxious moment for Hottieonthehorizon ($2.10) and the race was clearly for place as they turned for home, with longshot Shirley Skip Shady (Brady Jenson) making a nice late rally and checking in 1-3/4 lengths back to pick up second money while Shesureissomething was able to hold third in the 1:55.3 mile.

The winner is owned by Leslie Godlien and trainer Rick Lancaster, who teamed up for two wins on the Tuesday program.

Hottieontehorizon is one of the headliners for the 2022 Ron Banks Memorial Fillies & Mares FFA Pace, which gets underway with elimination races on Sunday, Aug. 7.

Dean Magee posted another driving triple to lead the Tuesday card, while Plano posted a double.

Live racing returns to Running Aces on Thursday for a special ‘Hope for Youth’ racing program, which is aimed at raising funds for and awareness of homelessness in the youth community.